So, the first book is done.  If you want to read the journey, click here for part 1.

Once upon a time I wrote a really good book.  I’m very proud of the Watcher.  But where do I go from there?

Once upon a time I dreaded the idea of doing a sequel to this.  I never planned the first book at all.  It was an accident.  This wouldn’t be quite so accidental.  I was continuing the story I started before.

Keep in mind, sequels by their very nature are harder than regular books.  You have to serve a bunch of masters doing one.  The first thing you have to do is look at what you think made the first book work, and try to keep that tone and feeling in book two, all the while doing something different.

What were my problems with this book?  There were a handful of them.  The biggest problem with the book was the Watcher himself.  He was such a defined character.  He had been the star of the first book and his journey had been amazing.  He had grown so much.

Kristen, Will and Nicki on the other hand were complete unknowns.  I had no clue who they were really, and if I didn’t I know the audience really didn’t either.  It would have been easy for me to just do another Watcher centric story with friends that would have served to add very little depth to them.

I needed to get to know them better.

The Watcher would go missing with this sequel and it would be up to his friends to find him.  (Or would they?)

I decided that either Nicki or Kristen would take the role.  Of the two, Kristen spoke to me the most.  She had been the most distant of the three characters in the first book, and a very good reason came to me why.

I had a start to my story.  Did I have an end?  Would the world come to me as easily as it did before?

Easier.  Now there is something to be said about sequels.  You know the tune to the music you are writing too more familiarly.  The trick about going on a journey with a different character is to have different things happen to them.  The City of Dragons is something I didn’t focus on in the first book.  What would a city of Dragons and Humans look like over a compound?

Her evolution was my favorite of any character I written.  Here she was in jail surrounded by dragons and humans and just made a decision to bust out.  With her friends she succeeded in doing so bare handed.  She is a living breathing bad ass and tougher than this writer will ever hope to be.

And you know what?  I like this book better than I like The Watcher.  It does venture into some of the same themes.  But like good sequels I think it managed to build on what came before.  The Watcher was about freedom, but Stormdancer was about family.  It was about the bonds of friendship surviving in a world such as this, and that love can move through anything.

Also,  I think Kristen is a more well rounded character than the Watcher himself is at the end of book two.  And as you can see above, Florence Chan killed it with this book.  My favorite thing she drew in here?  A pez dispenser.

The Pez dispenser came to me just while writing this.  I thought about all the religious artifacts in ancient times and just wondered to myself that what if all those things were nothing more than toys for children?  And maybe, just maybe, we just don’t know how to play with them any more than Kristen, Nicki or Will did in Stormdancer.  I really liked that thought.

Which leads to the final thing I want to discuss before I move on.  Rain dancing as a concept just intrigued me.  How could one make rain fall just dancing?  Only when I looked at my keyboard did the answer come to me.   What if dance movements were simply instructions inputted into a system?  How would I communicate that?

dot, dot, line, line is a primer.  And now dear reader, you may see some hidden messages between Kristen and the world of the Watcher you never saw before.  Stormdancing indeed has a message. 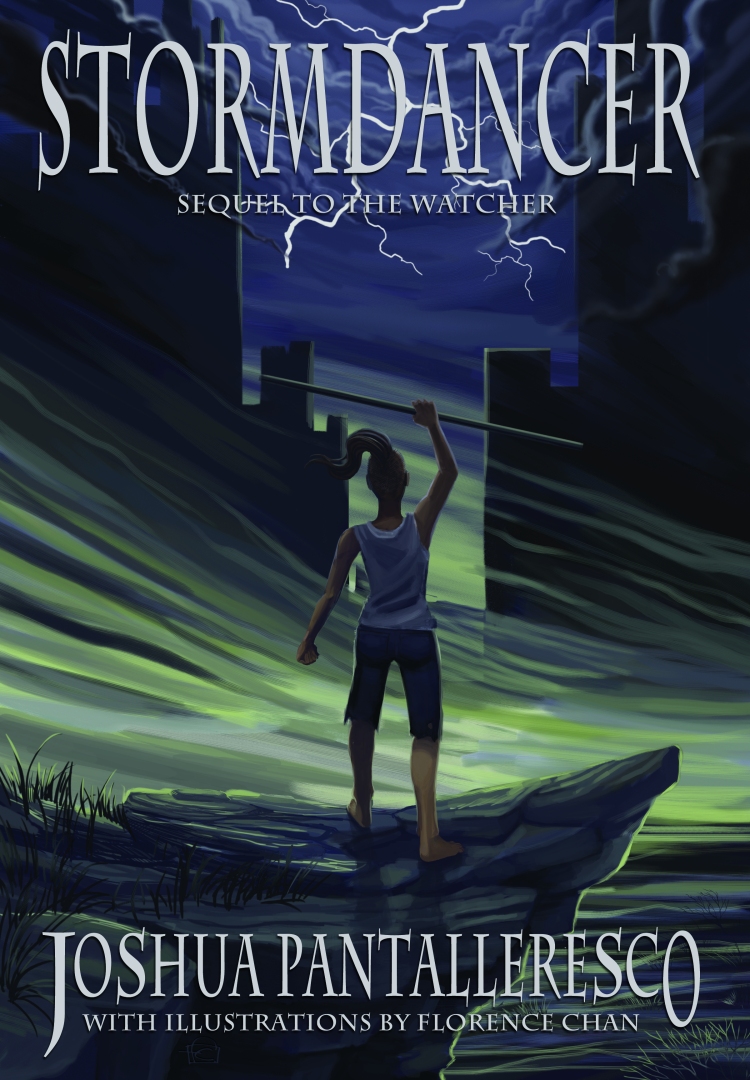 One other small change I should mention is that I wanted Florence to get a credit for this on the cover.  After all the work she put in, she deserved it.

One final note of serendipity and I will go.  During the stampede in Calgary it rains as it always does.  I needed to go out to a concert and it just so happens that Lights was performing.  Now she did make the mistake of a white shirt with no bra in the rain, but that aside, it was a great show.

I wrote Stormdancer to the Lights album Siberia and here I was once upon a time dancing in the storm listening to the very music that created a whole world.  Not only did I create it, I lived it.

Now you don’t need the Watcher to read Stormdancer, but I do hear that they go together like peanut butter and jelly.  You can buy them at Mirror World Publishing’s store or you check it out here, and if you do so, leave a review.