Twitter is an amazing tool.  You can meet thousands of people with the same wants and dreams you do at the touch of a button.  During my many random tweets in the twitterverse (I can’t believe how many “tw” words I’ve used this post already.) I came across Kory and after a couple of pleasantries were exchanged I glanced at her work.

Dying for a Living immediately grabbed me.  The idea of someone dying for a living was intriguing.  Who would do this to themselves and why?  Not to the mention the sheer consequences to such an action was intriguing.  It felt very much like a nice mixture between science fiction and horror.  Superpowers with a price has always been a draw in storytelling, and as such, I’m looking forward to reading the book.

After reading about her stuff, I asked her for an interview and Kory agreed.  Below is what we talked about.

Kory M. Shrum:  polishing up the sequel and a few short pieces.

JP:  Who are your influences?

KS: I have many influences (books, movies, TV) but since you said “who” I shall be more specific. Stephen King, Laurell K Hamilton, Ruth Ozeki, Neil Gaiman, JJ Abrams and Joss Whedon—to name a few.

JP:   I love personally Stephen King and Neil Gaiman personally.  What have they written that inspired you?

KS:  The Shining, Carrie, On Writing, IT, The Green Mile, Cell, Duma Key, The Girl Who Loved Tom Gordon to name  a few of King’s books.

From Mr. Gaiman, Stardust, Ocean at the End of the Lane, The Sandman Series, and Anansi Boys.

KS:  My lead, Jesse, has a neurological disorder that allows her to die for a living. As you can imagine such a talent complicates her life (and her death). It would certainly be cross-genre, invoking mystery, fantasy, scifi etc. Here’s the official synopsis for Book 1:

On the morning before her 67th death, it is business as usual for Jesse Sullivan: meet with the mortician, counsel soon-to-be-dead clients, and have coffee while reading the latest regeneration theory. Jesse dies for a living, literally. As a Necronite, she is one of the population’s rare 2% who can serve as a death replacement agent, dying so others don’t have to. Although each death is different, the result is the same: a life is saved, and Jesse resurrects days later with sore muscles, new scars, and another hole in her memory.

But when Jesse is murdered and becomes the sole suspect in a federal investigation, more than her freedom and sanity are at stake. She must catch the killer herself—or die trying.

JP:  My big question about your novel is why would someone die for a living?  Is there a point when someone becomes a husk because they forget those things that make you, you?

KS:  Well Jesse has her reasons for taking the job when Brinkley, her handler, offers it to her. She explains this in her story. But I think it is true for anyone who does things that other people don’t understand. We have our reasons.

And yes, there are certainly repercussions to her job. Dying is hard on the brain. It isn’t something that is supposed to happen on a regular basis—and Jesse is just starting to see the consequences of her choice.

JP: Do you yourself have a fascination with death?  It just seems like an interesting concept and I’d like to know where it came from.

KS:  I think everyone has a fascination with death, don’t they? 🙂 The idea came to me in a slightly delirious state while I was hiking up the side of mountain in Italy, dragging all my luggage in my wake. I’d been working on Jesse for a while, trying out a variety of super powers on her but nothing quite stuck. I was also trying to figure out what she would do for a living. Somewhere in that strenuous, oxygen deprived climb it all just came together. Call it inspiration, if you like 🙂

JP:   Is this the start of a series featuring Jesse, or is this a one and done kind of story?

KS:  Dying for a Living is the first in a series. The book stands alone in that it solves the major conflict presented in Book 1, but Jesse”s character arc–and larger circumstances–will develop over time. (6-8 books?)

JP:   Writing a novel from beginning to end is a tough thing, and you’re plotting six to eight with Jesse.  Do you have a plan outlined, or is it the kind of thing where you have ideas for multiple stories?

KS:  Well the first 2 are done, and I know where I want to end (as in how it all ends), so it is just a matter of resolving the issues presented in books 1-2 and arriving at the end. That’s about as planned as it gets for me 😉

JP:  You do poetry as well.  Do you prefer that or prose?

KS:  My poetry and prose are really very different. And because they serve vastly different needs, I don’t prefer one over the other. I need them both depending on the occasion.

JP: I read on your twitter profile that you teach, or am I imagining things.  If you do teach, what is it?

KS:  I do teach, you are correct. I teach writing at my local community college as well as online for a couple of other universities. I like teaching and think I’ll probably be doing it in one capacity or another for the rest of my life.

KS:  A variety of writing courses ranging from Freshman to Advance Composition as well as the occasional creative writing course.

JP:  Is there anything else you’d like to add?

KS:  I love to hear from other writers and people who’ve read my work, feel free to connect with me on Twitter, Facebook, G+ or on my website. 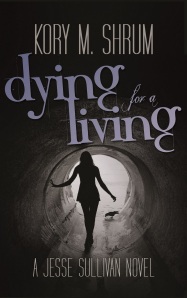 To check out Kory’s works, or just wanting to chat and say hello, her webpage is located at http://www.korymshrum.com.
You can find her at twitter at @korymshrum like I did, or visit her facebook page at http://www.facebook.com/korymshrum.  Finally Kory’s google plus page is located here: https://plus.google.com/102114093031552832467

I want to thank Kory for her time.  Check out her book Dying for a living which you can find at Amazon.  The link is here for those that are interested.    If you would be so inclined, feel free to check out my book The Watcher at smashwords right here.   Thanks all.  More interviews are coming soon.