Small Edit: Due to the sheer block of text, it occurred to me that finding the link to listen to the interview may be difficult. WordPress was EXTREMELY stubborn about me putting on a podcast player to make the audio file hard to find, so I’ll post it up here as well.

It has been a while since I interviewed Dirk Manning.  I first “met” Dirk online back when I was doing columns for Comic Bloc.  He was doing this column called Write or Wrong over at Newsarama.  His columns were his advice and experiences breaking into comics all the while promoting his online Comic Nightmare World.  I got into his stuff then, and I was really impressed.  Dirk is kind of a throwback in his writing – his anthology felt like a homage to EC Comics.  Some of the best stuff in the 50s and 60s came from that era, and Manning did his best to add that feel back into comics.

I could tell you they are all amazing stories, but no amount of words do them justice.  Manning is just gifted at telling great little stories that are horrifying and fun.  My personal Favorites from that collection include “Hungry Like the Wolf”, “Not For You”, “Eulogy”, “For Those About To Rock (We Salute You)” and many others.  To check them out click here.

But it was Write or Wrong that introduced me to Dirk.  I always wondered if there would be a book for these columns someday and sure enough at the end of last year it came to be.

Write or Wrong is Dirk Manning’s guide to creating comics.  Filled with many anecdotes both practical and from experience, Dirk takes a hard long look at what it takes to break into the comics industry.  There is tonnes of great advice on all avenues of the situation, from the idea to recruiting artists to the pitfalls and traps many a creator (including yours truly) have fallen into.  For me this was a pleasant stroll down memory lane, but with the added bonus of new and expanded material.  Some chapters are relatively untouched – one of my personal favorites Kill The Buddha isn’t that different at all from what I read back in the day from Newsarama.  Other chapters however, are modified and expanded into modern times.  A good example of this is Chapter 14 – E-Comics and Print On Demand which is updated to include the benefits of E Comics today and the issues of print on demand.  All in all it is a comprehensive, practical book to prepare aspiring creators down on the road of comics.

On a personal note, this column is one of my biggest influences getting into comics.  Veritas never would have existed without this column.  I consider it the second most important book on creating comics right behind Understanding Comics by Scott McCloud.  If you are an aspiring creator, this book is an absolute must.

Write or Wrong isn’t the only book Dirk is currently working on.  He just was published in Image/Shadowline/s Dia De Los Muertos.  In it, he has a short story called Te Vas Angel Mio illustrated by Riley Rossmo.  The tale is about a musician Juan, who spends his days singing about the death and loss of the woman he loves.   On the day of the dead, a woman who is the spitting image of his lost love.  It’s one of the sadder stories Manning has written, but also one of the cleverest.  I love the fact that the dialogue of the woman is all in spanish.  It adds a romantic tension to the story and stands her out from the rest of the script.  Also, Manning very cleverly doesn’t answer the obvious question whether or not this woman is a ghost or something else.  Like all good horror tales, he leaves that to you the reader.

I love how Rossmo uses the eyes to characterise the woman’s character.  They seem so knowing and tell her whole story without her saying anything about herself.  Megan Wilson is the unsung hero here.  Her choices of color definitely add the proper mood to the story. There is a very subdued yellow permeates each and every page of the book, whether it’s Juan’s makeup or the sky or even the smoke or the wine, it all conveys a certain sadness.  All in all this story is just very clever right down to the smallest details.

Not to mention that I just love the golden age format with this book.  It’s bigger, the art looks good and the story loses nothing.  There are two other stories in the anthology that are worth looking into.  I cannot recommend Dia De Los Muertos enough. 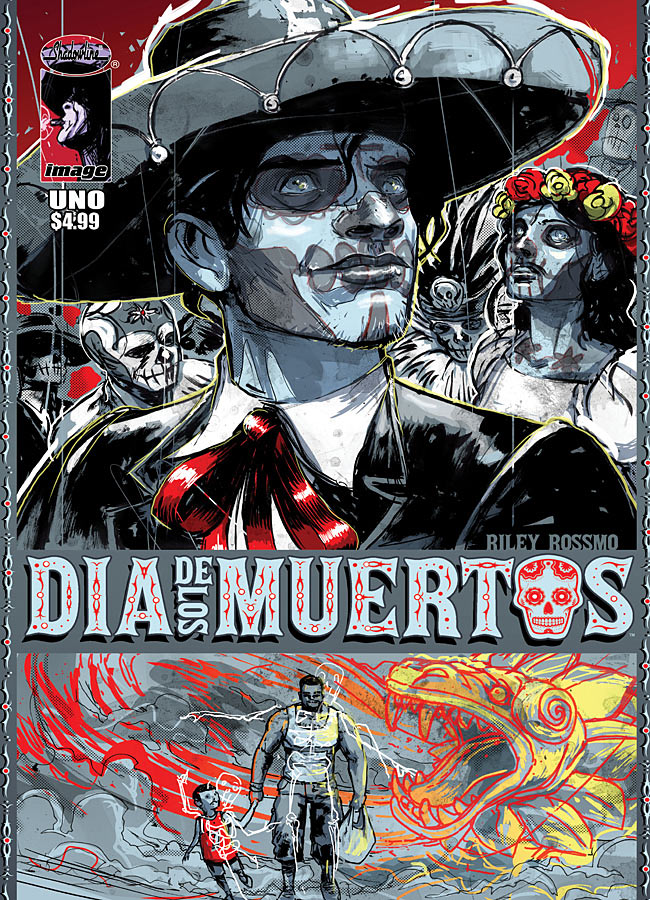 And now we come to the main event. Interviewing Dirk Manning this time was a brand new experience for me. We decided to do the interview on Skype, where I messed up more than enough times. To his credit Dirk was more than patient with me. I can’t thank him enough, and I have to say this is a fun conversation. The last ten minutes are a little tough on the audio, but all in all I’m proud of this interview. Give it a listen and let me know what you think.

You can find the interview at this link. Listen here.

When you’re done, I hope you check out the Grey Haven Anthology You are not alone on Kickstarter. Help fund this good cause by going to this link here. They are already funded as of this writing, but it’s still in my view something great to give to.

For more on Dirk Manning check out his author page here or on my corner blog. Once again I want to thank Dirk Manning. Special thanks to Riley Rossmo and Andrew Goletz. Thanks guys.